China is fighting for its right to pollute. The government has banned Chinese airlines from paying a pointless new European emission tax. 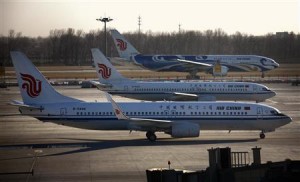 The argument isn’t really about the environment. It’s about China’s “don’t intervene” foreign policy, which also led it to veto a U.N. resolution against Syrian President Bashar al-Assad on February 4. This time China has the moral high ground.

China’s view is simple: stay out of our business and we’ll stay out of yours. It explains a tolerance for unsavory regimes in Syria or Sudan. Beijing has used Security Council veto only a handful of times since 1971 when it took over from Taiwan, but in the eyes of rich countries which accept in a “duty protect”, even occasional non-intervention looks callous. China blocked U.N. moves against regimes in Myanmar Zimbabwe and abstained on an anti-Taliban measure in 2000.

The EU’s new airline pollution tax is a new riff on that theme. From January 1, airlines landing or taking off in European airports must pay for the CO2 they emit for their entire flight. So a flight from Beijing to London must pay the EU for gases it emits over Kazakhstan, Mongolia, and even China. From a Chinese perspective — and an American or Indian one — that looks like intervention in other countries affairs.

In this case, Beijing looks about right. True, the EU tax punishes a British airline flying from London to Shanghai as much a Chinese one. But it unilaterally makes airlines pay EU member-states for something that happens above other countries. In effect, the European are claiming sovereign rights over foreign skies. Regardless of China’s weak record on global warming action, or the possibility of lost orders for Airbus, the EU should yield on principle.

Chinese principles may yet be modified for the sake of global harmony. Beijing’s says its airlines can’t pay the tax “without official permission”, leaving space for negotiations. But as China gets richer and more powerful, other countries will have to pay more attention to its view of sovereign rights. The “dirty skies” row shows that’s not always a bad thing.

— China’s government banned its airlines from participating in a European Union carbon tax scheme that would see operators pay for carbon emissions for all flights that begin or end on European soil. The announcement, made via the Xinhua official news agency, added that airlines would be prohibited from charging customers extra because of the EU plan.

— Airlines have been included in EU emission trading regulation since January 1. Each airline gets an allowance of 85 percent of its emissions at first, falling to 82 percent over time. Those that do not comply can be fined 100 euros per tonne of carbon dioxide emitted. Persistent offenders could be banned from European airports.

— The U.S. State Department and the Indian government have also expressed concern over the EU’s plan. Most objections have focused on the scheme’s inclusion of emission that occur outside of European airspace. Flights will be taxed on all carbon emissions from origin to destination.

— China and Russia both vetoed a United Nations resolution pressing Syria’s president, Bashar al-Assad, to step down, on February 4. all 13 other members of the U.N. Security Council voted for the resolution. An editorial in state-owned newspaper People’s Daily warned against “simplistically supporting one side and suppressing the other.”