Steve Case and Scott Case dropped by the Bloomberg offices in New York yesterday afternoon to talk up their Startup America Partnership as it nears its one-year anniversary. (The Cases are unrelated: Steve is best known as the co-founder of AOL (AOL); Scott as founding chief technology officer of Priceline (PCLN).) They’ve been leading a push to get corporate America and Government policymakers to better understand the difference between small businesses and startups aiming for exponential growth—and better support the latter.

Grasping the nuance is crucial, Steve says, because “ if you care about the economy… the place to focus is high-growth companies.” He notes that Kauffman Foundation data show 40 million jobs were created in the last three decades by these high-growth companies, “which they say accounts for all the net job creation.” There’s one big problem, though, he adds. “In the last five years, the number of new startups is down 23 percent. If it had stayed at the same level, we’d have two million more jobs in the economy.” 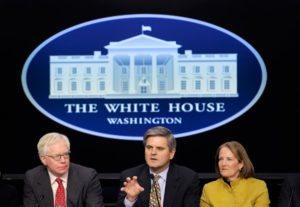 Beyond this push for enlightenment, the Cases want the Startup America initiative to serve as a practical tool for entrepreneurs who can benefit from private sector largesse (free legal and accounting services, for example), industry expertise, and professional connections.

While only about 2,200 startups have signed up to use the resources available through Startup America’s site, Scott says corporations including Dell, Google, and Microsoft have pledged about $1.2 billion in services for participating companies. He aims to get 100,000 startups to sign up by April by prodding supporters to recruit from within their own circles and corporate partners to push their customers to join. He estimates there are 1.5 million to 1.8 million U.S. companies that fit within the high-growth rubric that could benefit.

By the summer, Scott wants to release data showing how participants are faring. For now, though, he says he’s most concerned with helping founders and prompting would-be supporters to recognize that growth companies are a different breed.

“At the personal level, [entrepreneurs running high-potential ventures] as different people; they have a different mindset… [they] think that they’re going to disrupt the world or create a whole new market,” says Scott. “But that process, that churning out there in the unknown is what creates these blockbuster high-growth companies that pop out of seemingly nowhere. We need more of that in this country. And we need everybody that’s around those companies to recognize them because that’s where the huge opportunity lies”