With 13 million unemployed people seeking work in this country, it would seem like anyone who wants to hire someone would have little difficulty doing so.

But that’s not what many employers are saying.

Economists and labor experts say that in some industries, there is a legitimate talent shortage: There simply aren’t enough workers with the skills needed to do the jobs available.

But some also think there are other factors that are making it difficult for employers to connect with the right employees.

“Employers have been spoiled by the recession,” said Melanie Holmes, a vice president with Manpower Group.

Holmes explained that the nation’s high unemployment rate left many recruiters feeling they didn’t have to look very hard to find a great candidate, and they could skimp on money or benefits.

Employers also may not be willing to spend the time or money trading someone for a highly specialized job, or one that required unique skills.

“Employers are getting pickier and pickier,” Holmes said. “We want the perfect person to walk through the door.”

Steven J. Davis, a professor at the University of Chicago’s Booth School of Business, regularly tracks “recruiting intensity per vacancy.” which is essentially a measure of how hard employers are looking for the right employees. He said recruiting intensity declined a lot at the onset of the financial crisis n 2008, has only recovered partway as the economy has improved. 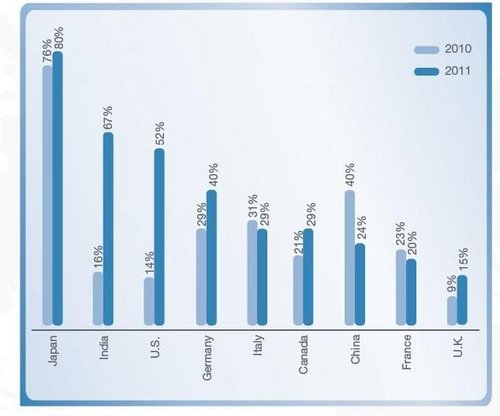 With the economic recovery still so weak, Davis said, “maybe most employers don’t feel a great sense of urgency in order to increase their ranks.”

Still, Davis said there also are legitimate, longer-term and concerns about American workers’ skills. He thinks one big issue is the swath of mostly male workers who may have made a decent living in low-skill construction or manufacturing jobs but now find they can no longer get a job in those fields. They also don’t have the education or training to get a different job,

“There’s a generation of young men who might have gotten the training to become a healthcare tech but instead they’re working in the construction sector, and it’s difficult to make that transition if you’re now in your early 30s and you’ve been earning a good living in construction,” he said.

The skills gap is not a new problem. The Manpower results were part of a global study of about 40,000 employers worldwide. Since 2006, the survey has consistently found that between 30 and 40 percent of employers say they can’t find the right workers for the jobs they have open.

“Still, the gap between what employers want and which workers are available isn’t nearly enough to explain the nation’s high unemployment rate,” said Heidi Shierholz, an economist with the Economic policy Institute. The unemployment rate fell to 8.5 perfect in December, according to the Bureau of Labor Statistics, but is still much higher than before the recession began in 2007.

Shierholz noted that unemployment rates are elevated across most industries and all education levels, which is a sign that there simply aren’t enough jobs to go around.

View the original article at MSNBC.