It’s no secret that the years since the financial crisis have been tough on small business. What’s more surprising, though, is that their role in the U.S. economy had already been diminishing for years before the Great Recession. Small companies’ contribution to America’s total economic activity and job growth has dropped significantly in the last decade, according to a new paper from the Small Business Administration’s Office of Advocacy.

Companies with fewer than 500 employees were long thought to make up half of private non-farm gross domestic product and create 65 percent of the new jobs, according to widely cited government research. In fact, their share of GDP dropped from 48 percent in 2002 to 46 percent in 2008, and probably weakened further in the next two years, according to a new analysis for the SBA by economist Kathryn Kobe. 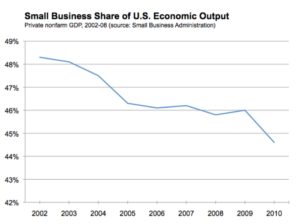 And even though small businesses are widely hailed as job creators, over the last three quarters in 2010 they were responsible for just over half of the net new jobs, the paper suggests, compared to two-thirds in earlier periods. Kobe cautious against drawing too many conclusions from such a short period, however. “During different parts of the business cycle, there are different things going on in small and large businesses,” she said in an interview

As the report notes, corporate profits (which are dominated by large businesses) rebounded faster than other business income (from sole proprietors, partnerships, etc.) after the 2001 recession, and we saw a similar pattern in this recovery. Construction is a big part of the reason. Small businesses employed 84 percent of construction workers in 2008. That industry took the biggest hit from the housing collapse and has been the slowest to recover.

In other industries, such as wholesale and retail trade and professional services, the small business share of GDP declined as the industries consolidated and small companies employed fewer workers than before. “It’s a combination of how small businesses are doing within these sectors but also how important these sectors are to the overall economy,“ Kobe says.

Her analysis also uses new data to more precisely determine what counts as a small business. Starting 2002, the paper counts large companies that are not incorporated (such as big law firms still organized as a partnership, or big LLCs) as large businesses. Before that, these were automatically counted as small companies (the data to discern larger entities wasn’t available).

That change in methodology help take two points out of small businesses’ contribution to the economy, measured at 50.3 percent in 2001 and, with the new method, 48.3 percent in 2002. After that, however, the decline is fairly consistent. And though the numbers for the last two years in the paper were based on trends rather than complete data, Kobe’s research suggests that by 2010 small business accounted for less than 44.6 percent of private non-farm GDP — a meaningful drop from the start of the decade.