Your Résumé vs. Oblivion

Recruiters and hiring managers are overwhelmed by the volume of resumes pouring in, thanks to the weak job market and new tools that let applicants apply for a job with as little as one mouse click. The professional networking website LinkedIn recently introduced an “apply now” button on its job postings that sends the data to a job seeker’s profile directly to a potential employer. 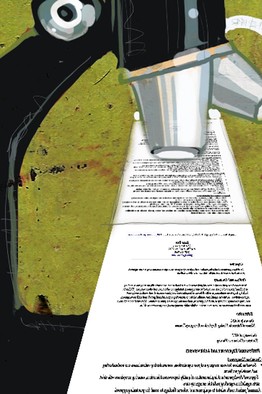 While job boards and networking websites help companies broadcast openings to a wide audience, potentially increasing the chance the perfect candidate will reply, the resulting flood of applications tends to include a lot of duds. Most recruiters report that at least 50% of job hunters don’t possess the basic qualifications for the jobs they are pursuing.

To cut through the clutter, many large and midsize companies have turned to applicant-tracking systems to teach resumes for the right skills and experience. The systems, which can cost from $5,000 to millions of dollars, are efficient, but not foolproof.

Ed Struzzi, an International Business Machines Corp. expert on the systems, puts the proportion of large companies using them in the high 90% range, and says it would “be very rare to find a fortune 500 company without one.”

At many large companies the tracking systems screen out about half of all resumes, says John Sullivan, a management professor at San Francisco State University.

No wonder: Starbucks Corp. attracted 7.6 million job applications over the past 12 months for about 65,000 corporate and retails job openings; Procter & Gamble Inc. got nearly a million applications last year for 2,000 new positions plus vacant jobs. Both companies use the system.

Although they originally evolved to her employers scan paper resumes into a database, do basic screening and trace an applicant’s path through the interview and hiring process, today’s tracking systems are programmed to scan for keywords, formers employers, years of experience and schools attended to identify candidates of likely interest. Then, they rank the applicants. Those with low scores generally don’t make it to the next round.

The screening systems are one-way companies are seeking to cut the costs of hiring a new employee, which now averages $3,479, according to human-resources consulting firm Bersin & Associates. Big companies, many of which cut their human-resources staffs during the recession, now spend about 7% of their external recruitment budgets on applicant-tracking systems, the firm says.

At PNC Financial Services Group, which has used the tracking software for 15 years, an applicant for a bank-teller job is filtered out of his resume doesn’t indicate that he has two to three years of cash-handling experience. PNC emails rejected applicants within a day, suggesting they search its website for jobs for which they are better qualified, says Jillian Snavely, senior recruiting manager. 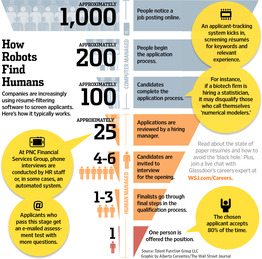 A recruiter reviews applicants who make it through the first cut, which includes the resume screening and a brief questionnaire out relevant skills. Those applicants get a live or automated phone interview.

Tracking software has its pitfalls. It may miss the most-qualified applicant if that person doesn’t game the system by larding his or her resume with keywords from the job description, according to Mark Mehler, co-founder of consulting firm Career Xroads, which advises companies on staffing.

But the ideas aren’t to replace human screeners entirely. Experts say the systems simply narrow the fields to a size hiring manager can handle. They also stress that, despite advances in the software, the single best method of getting a job remains a referral from a company employee.

One small error, such as listing the name of a former employer after the years worked there, instead of before, can ruin a great candidate’s chances.

“There are some things parsers are just too stupid to figure out, “says Bersin & Associates Chief Executive Josh Bersin. And they do add to job seeker’s impression that submitting applications online is largely futile, even after that person customizes a resume for a job that seems a natural fit.

“I kind of wonder if some of the jobs I’m applying to even exist,” says Asa Denton, a 31-year-old software programmer in Reno, Nev., who has been job hunting for four months.

Elaine Orler, president of Talent Function Group LLC and an expert on the tracking systems, says they should be more candidate-friendly. In the future, she says, forward-thinking companies will allow applicants to check the status of their applications online. The bottom line, she adds: “Candidates deserve respect.”

For all their flaws, recruiters generally prefer the automated systems. Texas Roadhouse Inc., a restaurant operator with over 450 locations, plans to adopt a tracking system this year to handle the flow of applications for hourly jobs.

Julie Juvera, head of human resources at the chain’s headquarters in Louisville, Ky., says she gets a many as 400 resumes for a job opening within 24 hours after listening to it online. “We used to hand-write a postcard to every single applicant saying ‘thank you so much for applying.’ But that’s become too overwhelming and tedious.”

Now the company sends an automated email to an application to tell him his resume is being reviewed, and that it will contact him if it considers him for a job.

Resume overload isn’t just a big-company problem. Job seekers often are surprised when they don’t hear back from small businesses. These businesses rarely hire enough people to make an applicant-tracking system cost-effective, but even a one-time posting on a well-trafficked job board like Monster.com can garner hundreds of responses.

Only 19% of hiring managers at small companies look at a majority of the resumes they receive, and 47% say they review just a few, according to a recent survey by Information Strategies Inc., publisher of Your HR Digest, an online newsletter.

When Mr. Denton, the software programmer, sent his resume to Google, Inc. and Walt Disney Co., he wasn’t terribly surprised when he received nothing but an email acknowledgment, but he expected a more personal response from a small Reno company.

When he called to ask for an update on his application, he was told the company’s vice president was in charge of hiring, a surmised that the executive was too busy to read through the submissions. “What I’m going to do is turn up on their doorstep,” says Mr. Denton. “I really have nothing to lose.”